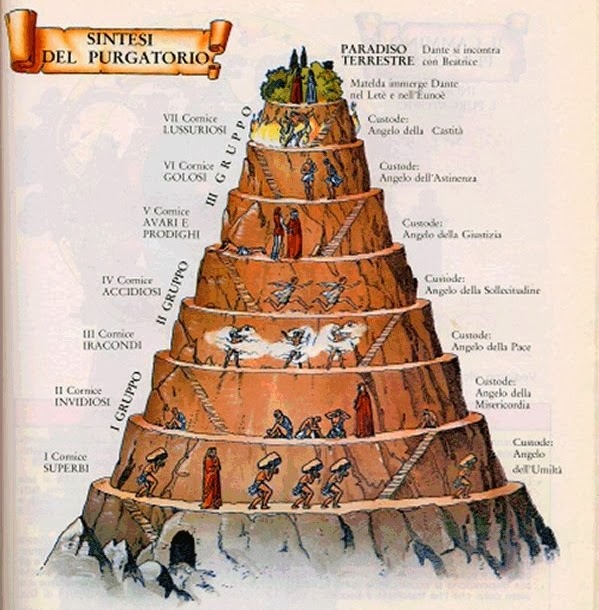 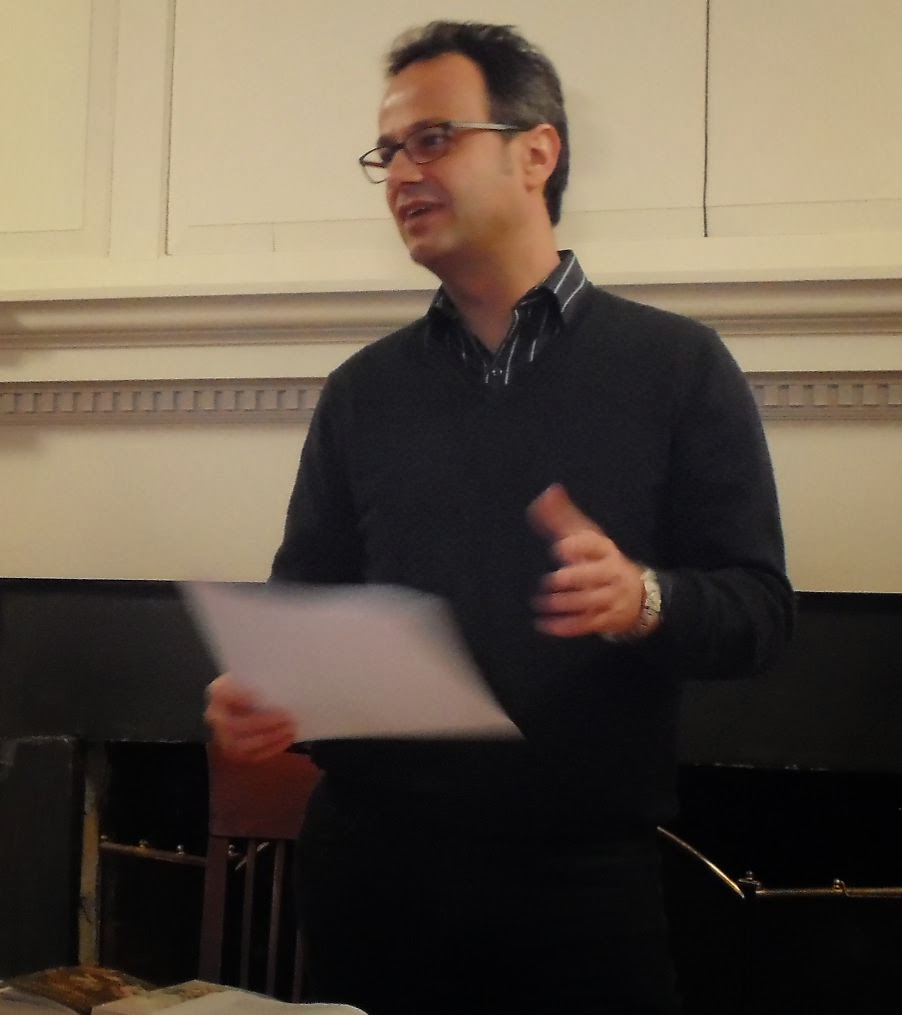 Two years ago we had the pleasure of having Dr. Stefano Mula as a guest teacher.  He taught us about the Cistercian Exempla, stories about the ealy Cistercian monks that have a lot of meaning if not facts.  This year we invited him back to give us classes on the Divine Comedy by Dante Alighieri.  Dante is on a quest through hell, purgatory and heaven.  It is a deep and rich poem; full of meaning, adventure and lessons.  We learned so much!  I believe that most of us are committed to reading the poem in full now that we have a much greater understanding of it.  Dr. Mula is an Italian from Sardinia and listening to him read passages from the Divine Comedy in Italian was delightful.  Dr. Mula is Chair and professor of Italian and Comparative Literature at Middlebury  College in Vermont. 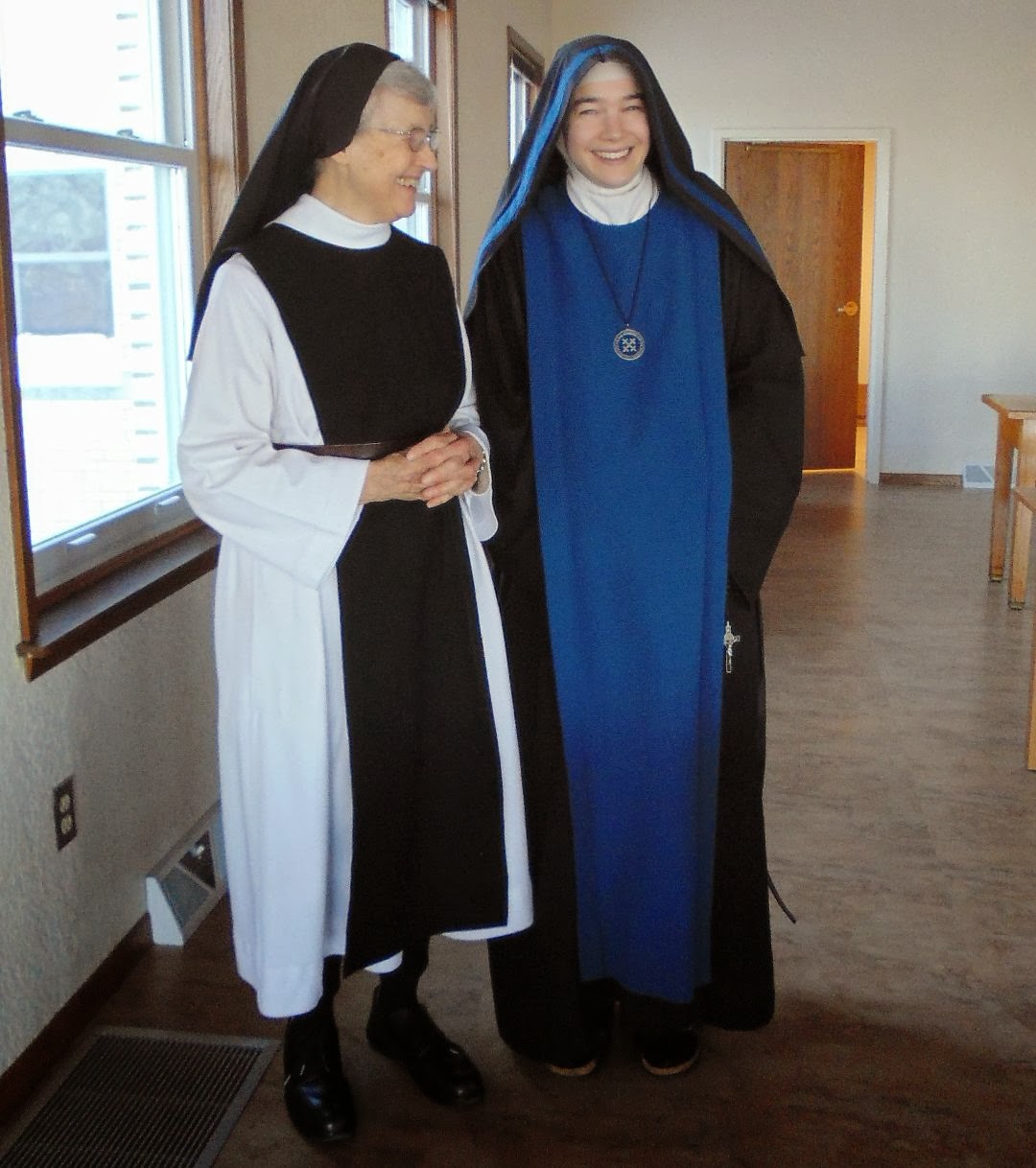 For the past week we have had a very special guest.  Sr. Therese from the Order of Julian of Norwich is a monastic order of monks and nuns of the Episcopal Church.  What makes it so special is that we are now celebrating the week of prayer of Christian unity which has been celebrated for the last 106 years.  One of the Cistercian Order's Blesseds , Blessed Maria Gabriella a Cistercian nun from Italy offered her life for the cause of Christian unity.
Here is a little about her: 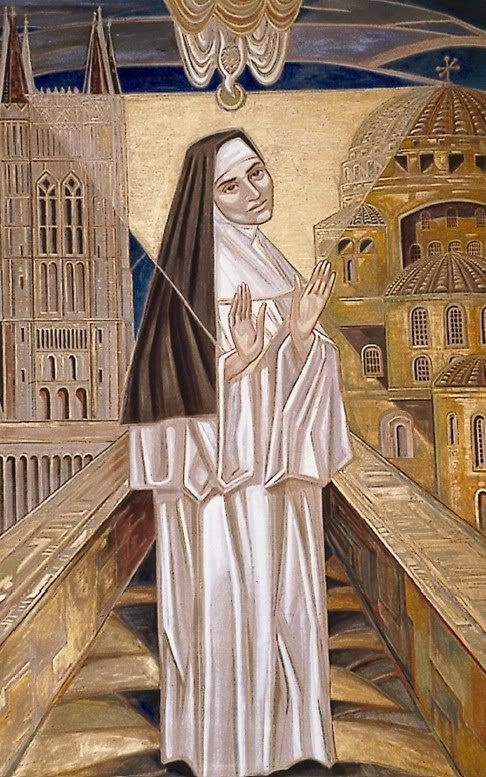 BLESSED MARIA GABRIELLA SAGHEDDU (1914-1939)
Maria Sagheddu was born in Dorgali, Sardinia, into a family of shepherds. Witnesses from the period of her childhood and adolescence speak of her as a girl with an obstinate, critical, protesting and rebellious character, but paradoxically with a strong sense of duty, loyalty and obedience: "She obeyed grumblingly, but she was docile", it was said of her. "She would say, 'No,' but she would do the task at once."
What everyone noticed was the change that came over her when she was 18. Little by little she became gentle. Her outbursts of temper disappeared. She became more pensive and austere: more tender and reserved. The spirit of prayerful charity grew in her, togther with a new sensitivity concerning the Church and the needs of the apostolate. She enrolled in "Catholic Action", a Church-sponsored youth movement.
A new depth of receptivity was also born in her, one that hands itself totally over to the will of God. At 21 she decided to consecrate herself to God. Following the guidance of her spiritual father, she entered the Cistercian monastery of Grottaferrata, an economically poor and culturally under-developed community, governed at that time by Mother Maria Pia Gullini.
Her life in the monastery appears to have been dominated by a few essential principles: - The first and most obvious of these was gratitude for the mercy which God had poured out on her, calling her to belong completely to him. She liked to compare herself to the prodigal son and could only say, "Thank you!" for the monastic vocation, her monastery, the superiors, the sisters, everything. "How good the Lord is!" was her constant exclamation and this gratitude will pervade everything, even the last moments of her illness and agony. - The second principle of her life is the desire to respond to God's grace with all her strength, so that what the Lord had begun in her might be completed and God's will fulfilled in her, because here is where her true peace lay.
In the novitiate she was afraid that she would be sent away, but after her profession this anxiety was overcome and a peaceful, trusting self-surrender took its place, producing a deep inner drive toward the complete sacrifice of herself: "Now do what You want with me!" she would simply say. Her brief life in the cloister -- she lived as a nun for only three and a half years -- was consumed simply, like the Eucharist, in her daily commitment of conversion, so as to follow Christ better in his obedience to the Father unto death. Gabriella saw herself as defined by a mission of self-gift: the total handing over of herself to the Lord.
The memories which the sisters have of her are both simple and meaningful: her promptness in acknowledging her faults and asking pardon of others without justifying herself; her simple, sincere humility; her cheerful readiness to do any sort of work, even the most tiring, without making a fuss about it. After her monastic profession there grew in her the experience of her littleness: "My life is of no value..., I can offer it in peace."
Her abbess, Mother Maria Pia Gullini, had a precocious ecumenical awareness and a desire to work for Christian unity. She had communicated this desire to the community, so when she explained to the sisters the Church's request for prayer and offering for the great cause of Christian Unity, Sr. Maria Gabriella felt immediately involved and interiorly compelled to offer her young life. "I feel the Lord is calling me" - she confided to her abbess - "I feel urged, even when I don't want to think about it".
By the quick, straight road of her tenacious commitment to obedience, Gabriella attained the inner freedom to be conformed to Jesus, who "having loved his own who were in the world, loved them to the end". As a counterweight to the laceration of the Body of Christ, she realized the urgency of offering herself and carrying out that offering with faithful consistency until its final consummation. She was conscious of her own frailty, but her heart and her will had only one desire: "God's Will! God's Glory!" On the very day of her offering, tuberculosis appeared in her young body which until then had been extremely healthy. It swept her to her death after 15 months of suffering.
On the evening of 23 April 1939, Gabriella ended her long agony, totally abandoned to the will of God, while the bells were ringing full peal at the end of Vespers on Good Shepherd Sunday. The Gospel that day had proclaimed: "There will be one fold and one Shepherd."
Even before the consummation of her offering, her self-gift for the sake of Christian Unity had been communicated to the Anglican brethren and had been welcomed by them. It has also sparked a deep response in the hearts of believers of other Christian confessions. The most concrete gift of Sister Gabriella to her own community has been the influx of vocations, who arrived in great numbers during the following years.
Her body, found intact on the occasion of its recognition in 1957, now rests in a chapel adjoining the monastery of Vitorchiano, where the community of Grottaferrata has transferred. She was beatified by John Paul II on 25 January 1983 in the basilica of St.Paul outside the Walls. It was 44 years after her death, the feast of the Conversion of St.Paul and the last day of the week of prayer for Christian Unity.
Publications in English: - Mary Paula Williamson, R.C.: THAT ALL MAY BE ONE - P.J.Kennedy and Sons, New York 1949. 185 pp. - Martha Driscoll: A Silent Herald of Unity, (Cistercian Studies Series 119) Cistercian Publications, Kalamazoo, Michigan 49008, 1990. 142 pp. - Paul B.Quattrocchi: A Life for Unity: Sr.Maria Gabriella - New City Press, New York 1990. 183 pp. - Pearce Cusack: Blesed Gabriella of Unity: A Patron for the Ecumenical Movement, Cistercian Press, Ros Cré, Ireland 1995. 166 pp. - Monica Della Volpe: "Blessed Maria Gabriella Today" in Cistercian Studies Quarterly 35 (2000), pp.335-344.
No comments: 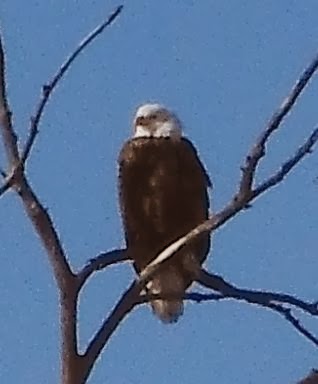 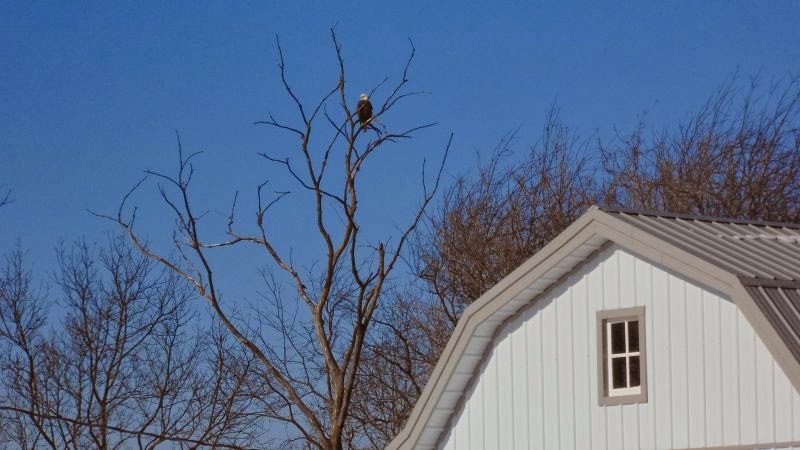 One of the beautiful things about living in view of the Mississippi River is watching the eagles who live along the river soar and play.  Sometimes they just sail past your window.  The population seems to increase in the winter months.  What is unusual is to see an eagle at rest in a tree.  This truly is a rare sight.  A few days ago M. Rebecca saw an eagle in a tree close to the horse barn.  She ran back to the abbey to get the camera so she could shoot these photos.  "it was really big", she described.  The wind was blowing rather fiercely and if you look you can see the feathers of the eagle being ruffled.
No comments:

Here at OLM be begin celebrating Christmas on December 24th.  On the 23rd all decorating is done so that Christmas Eve can be a quiet day of prayer and reflection.  On Christmas Eve night we have the Christmas tree blessing in the refectory along with Compline,  The tree is lit at this time.  For us,


Christmas continues through it's liturgical season.  Today we celebrate the solemnity of the Epiphany.  The kings who have been wandering around the house or outside have finally made it to the crib.  Next Sunday we celebrate the Baptism of the Lord and this feast ends the Christmas season.