On October 6th we celebrated the Diamond Jubilee of four Cistercian sisters.  Srs. Gail and Carol from OLM Abbey, Sr. Barbara from Our Lady of the Angels Abbey in Virginia and Sr. Lillian an OLM Abbey sister who has lived as a hermit in Florida for the last 30 years. 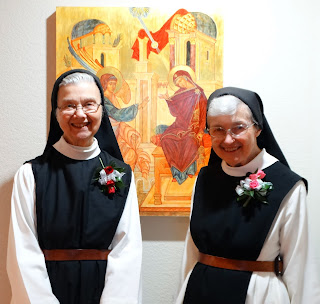 Srs. Gail and Barbara shared initial formation together at Mount St. Mary's Abbey in Wrentham, MA. and were clothed together and made both simple and Solemn profession together.  Srs. Gail and Lillian came on the foundation to OLM and Sr. Barabara went on the foundation some years later to Our Lady of the Angels.  Sr. Carol was a Mercy sister in Cedar Rapids, IA and entered OLM in the early 1970's. 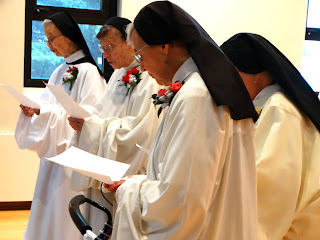 Dom Mark Scott, our father immediate from New Melleray Abbey presided at the Eucharist and the sisters renewed their vows after the Gospel was read.
No comments: