Dom Armand Veilleux stopped by to visit the community after he attended a planning meeting in Chicago for the upcoming International Lay Cistercian meeting.  Dom Armand is the retired abbot of Scormont Abbey in Belgium, the abbey that is famous for its beer.
He is very knowledgeable about matters of the church and of our order.  As a young monk he attended all the sessions of Vatican II, and recently he attended the beatification of the our martyred  Atlas brothers in Algeria.  He visited the brothers 2 months before they were abducted. 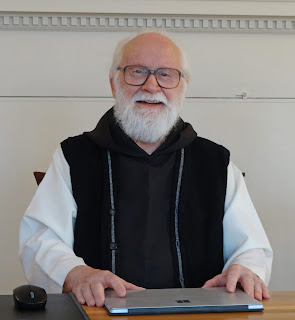 Dom Armand gave us several talks including the history of early Cistercian documents that even today guide our life, the history of the monastery in Algeria and several spiritual talks.  He is very interesting and his breadth of knowledge is amazing.