Feast of the Immaculate Conception

Yesterday we celebrated the feast of the Immaculate Conception.  A few years ago our Sr. Grace was preparing a Chapter talk for this feast.  In order to prepare for it she did this drawing which she shared with us when she gave the talk.  Someone suggested it become our next Christmas card; which it did. 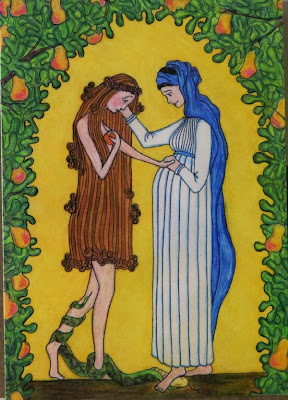 An article appeared in the Tablet by Richard John Neuhaus; the recently deceased theologian.  He had received the Christmas card.  He  commented that he had never seen Mary and Eve together and was quite taken by the drawing.  The Christmas card also contained a poem written by our Sr. Columba: 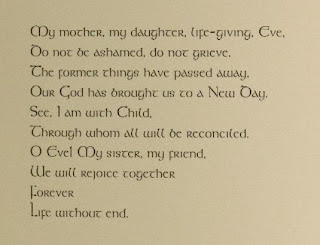 Her poem was noticed by the composer Frank La Rocca in California and he wrote asking permission to put the poem to music.  The piece was first performed in Glasgow, Scotland.  Listen:  http://www.franklarocca.com/rec/oeve3w.mp3
We started selling the cards as Christmas cards and blank cards as their was a large request for them.  We even started making available matted prints because so many people asked for them.
The drawing and the poem fill us with hope, Advent hope.  It must be why it's so popular.